I know I'm lucky my two have been raised with the respect for others, I can take them anywhere and be proud of them - I just feel the worlds gone mad with do-gooders. I've never had the cane at school, I was always too worried about being in bother and upsetting my parents, but I feel its swung too much the other way now...
Message Me
Send Nod
Add Favourite
View Profile
Message posted by Nutkin68 on 31 January 2010 at 19:22

I went to school in Kettlethorpe.  Fights were so frequent and violent that sometimes the only way for the teachers to stop them was for the bigger ones to join in lol!!

I was taught to respect everyone and everything.  If it wasn't mine then I simply don't even touch it.  However, I was also taught that if someone touches something of mine without permission, their fingers are to be broke.

And I can honestly say it's a mindset I hold till this day.  I'm going to be polite towards you whether I want to or not, but you take something of mine and I'm gonna hurt you!

I truly believe that is how it should be, the problem is our stupid laws don't agree.  In most countries in the world if someone breaks into your house you can hurt them, shoot them even.  If someone breaks into a house in this country the owner has to first check they didn't cut themselves on the broken glass they left behind, then to offer them a cuppa as they're probably quite tired after climbing over the roof and to finally offer to carry the tv out to their van so they don't do their back in.

Hey Nutkin.... why stop at the hands ....lets pull their arms off and make sure

hee hee shell, yes, I do remember that, was the talk of the school all day ! 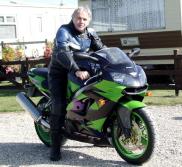 I feel that some of you are being a bit hard on the guy concerned. Maybe in hindsight, he should have sold his bike and bought another when his fortunes improved and we don't know how well he had secured it. But we shouldn't be so judgmental. However, since the police were showing no discretion with what is clearly a corrupt policy, he was fighting back in the only way he could. With regard to the caution, a cop that I knew said that you can be cautioned by a senior officer and then refuse to accept it. They then have to prosecute which would give him his day in court to tell the world how he's been treated or more likely they would drop it and just make threats about not doing it again.

I think he should now approach his local police committee and complain about what is clearly a money making enterprise which does nothing for the public.

What would be a wheeze would be if he passed on the pound's e-mail address to a large number of people through a forum like this and then members of the forum all sent half a dozen e-mails every day. I&#39d like to see the fuzz arrest everyone who participated in that!

It's not that we are or should i say im being hard on him it's simply if you get it nicked and it's not insured you have to pay the impound duty out of your own pocket.
Numbty boy is arguing with a Police procedure that you can't get away from. Pay up if want it back.
It sounds like he has no cash to pay the bill thats why he's arguing.....tough but that's the way it is.

Yeah I know SDV but I think that what  Cataraptor says is right though and it is not a fair system. This guy should have known better than to leave an uninsured bike on display - put in the kitchin, thats what there for! But at the same time he is the victim of a crime and should not have to cough up money to get his property back. If someone got a flatscreen tv nicked n the cops recovered it ya would not expect to pay over £100 to get it back regardless of wether you had house insurance or not.
Message Me
Send Nod
Add Favourite
View Profile
Message posted by Bloggsey on 01 February 2010 at 21:34

Well if it was a fair system when a person is caught stealing they should have to pay the costs incurred by the injured party.   Or a fund similiar to the criminal injuries compensation scheme should be set up funded by the fines / confiscation and sale of untraced recovered items and recovered and seized assets from these thiefs.   I think those funds are already spoken for by the current regime lol
Message Me
Send Nod
Add Favourite
View Profile
Message posted by johnnytb on 01 February 2010 at 21:52

The police don't make money, it all goes to the recovery company.   I know because I had to pay for my little brother's bike before Christmas.  He was visiting a friend and when he came out of her house he found his bike missing.   So, he called the police who found the bike just a few houses away in the local bike-theif's garden.  The police then arrested the guy and confiscated the bike "for fingerprinting/evidence".   So, even though Paul was standing there (with the keys!) they still wouldn't let him take it back, because it was on private property (well, 1 metre from the foot path!).   The filthy scumbag cop (and yes this is GMP who I worked for for 6 years, and now have NO respect for!) left my little kid-brother 25 miles from home, with no money and no way to get back to where he lives!   And the outcome?  A 200 quid recovery bill plus 100 quid repair to the steering lock that I paid for him so he could get his bike back, and they still didn't press charges against the scroat that took his bike!   So, 300 quid so that the cops could get evidence that they didn't use - all out of my pocket (or rather a 17 year old kid's who only works in KFC a couple of hours a week around college!).   Absolutely disgusting!   And people always ask me why I left that dump of a country? (Sorry Kwak, I know you love the UK but here's one a million reasons why I left!)
Message Me
Send Nod
Add Favourite
View Profile
Message posted by Matt on 01 February 2010 at 22:19    Matt @ 01/02/2010 22:19:01

Yes Battysteve it is unfair i will agree and i wish more common sense would be applied to every day situations and a overhaul of British law should be done, as johnnytb has said the person caught stealing should pay for damage/loss of property or earnings to the injured party.
It should not have to be up to the injured party to seek compensation in a court of law to recover any outstanding monies it's wrong but this is what we have to put up with until the system is changed.

If the law was applied in the way it was intended I think it would be ok but it gets twisted and perverted along the way, scum bag lawyers using the human rights bill to get people off who should have been behind bars years ago...... i suppose the prosicution have to try to fight the ones they know they can win.... The problem with Matts brother bike theft is usually that they can't prove that the guy actually took the bike, he could argue that someone stole it and put it in his garden etc to incriminate him.....
Message Me
Send Nod
Add Favourite
View Profile
Message posted by johnnytb on 01 February 2010 at 23:51

Same police that alinate socity then get upset when no one comes forward when they are looking for our help   If you are the legal owner of an Item then are the impound yard not handling stolen goods that should be returned to ther rightful owner
Message Me
Send Nod
Add Favourite
View Profile
Message posted by micksaway on 02 February 2010 at 01:22

When I was involved in lobbying for riders' rights, I wouldn't have gotten very far by meekly accepting this nonsense which, to me, amounts to corruption. The first step would be to put in an official complaint and suggest that the fuzz are getting backhanders from the recovery companies.

Most police forces seem to have adopted this iniquitous policy so approaches should be made to the local police committees for individual cases and the Home Office for a change in the law. While I didn't always get anywhere, the object of the exercise was to give the opposition a bloody nose so that they would think twice before trying to pull a similar stroke in the future.

Maybe BMF and MAG could mount a campaign. That's what those of who are members pay for.